Turks angry over dearth of protest coverage by established media 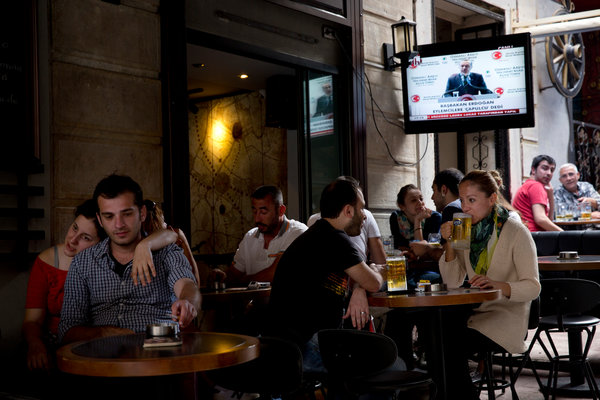 The Turkish government blames Twitter. Many Turks point their fingers at a cowed news media.

As protesters took to the streets of Istanbul and other cities, confronting security forces wielding water cannons, plastic bullets and tear gas, the leading Turkish television channels stuck with scheduled programming: a cooking show, a nature documentary, even a beauty pageant. To find out what was going on — and, the government maintains, to fuel the violence — Turks turned to Twitter and other social media.

On Wednesday came the backlash. The semiofficial Anatolia news agency said the police had detained 25 people on suspicion of using Twitter to incite crime. The arrests underline Prime Minister Recep Tayyip Erdogan’s antipathy for social media, which he denounced on Sunday as “the worst menace to society.”

Mr. Erdogan singled out Twitter for what he called its role in escalating protests that began last week in Taksim Square in Istanbul and quickly spread to other cities, saying, “The best examples of lies can be found there.”

Critics of the government acknowledged that misinformation flourished on Twitter and other social media, with incorrect reports that the crackdown had resulted in large numbers of deaths, and digitally altered photos said to be of victims.

But they added that the rumors spread because the established news media were guilty of a lie of omission.

“Of course there is a dark side to Twitter,” said Asli Tunc, a media professor at Istanbul Bilgi University. “But if the mainstream media had done their job better, there would be less of this.”

As the protests escalated during the weekend, some demonstrators redirected their anger toward media organizations. On Sunday, hundreds of people gathered outside the offices of one broadcaster, HaberTurk TV; on Monday, a larger protest took place at another channel, NTV, with employees of the channel joining in.

On Tuesday, Cem Aydin, chief executive of Dogus Media Group, the parent company of NTV, apologized to viewers for the channel’s lack of coverage in the early days of the protest.

“Our audience feels like they were betrayed,” he said in a video of a speech to NTV employees, which was posted on the channel’s Web site. “Our professional responsibility is to report everything in the way it happens. The pursuit of balance within the imbalanced environment affected us, as it did the other media outlets.”

“We owe you and our audience an apology,” he added.

For a country with democratic elections, Turkey has a robust tradition of suppressing free speech, on the Internet and in the mainstream media. A World Press Freedom Index published byReporters Without Borders, an advocacy group based in Paris, ranks Turkey a lowly 154th among 179 nations.

From 2007 to 2010, YouTube was repeatedly blocked after videos insulting Mustafa Kemal Ataturk, the first president of Turkey, were posted on the site. Dozens of journalists have been jailed in recent years, including many who have been accused of aiding terrorism by interviewing Kurdish separatists.

Still, there appear to be differences between the Turkish government’s response to the protests and the communications crackdowns employed by authoritarian Middle Eastern regimes during the Arab Spring, when several governments suspended Internet or mobile phone service in an effort to stop the spread of rebellion.

An executive of one leading Western Internet company, speaking on condition of anonymity, said that since the protests began in Turkey, there had been no sign of the government moving to cut off access to leading Web platforms like Twitter or Facebook, though some residents complained of sporadic outages of both.

Yet analysts say indirect censorship is widespread, with journalists operating in a climate of fear. Many of the leading Turkish newspapers and television broadcasters are owned by conglomerates with holdings in businesses like construction, where government contracts are an important source of revenue.

“If you are a company in construction that is trying to get government tenders, you are probably going to be careful about what you let your media company say,” said Didem Akyel Collinsworth, a Turkey analyst at the International Crisis Group, an organization based in Brussels that works to defuse international disputes.

Fresh on the minds of many Turkish media owners is the $2.5 billion fine issued against one leading company, Dogan Holding, in 2009 — ostensibly for tax evasion but also levied shortly after the company’s publications had given prominent attention to corruption scandals involving government officials.

Over the past week of protests, the television news void was not total. One previously obscure channel, Halk TV, which has ties to an opposition political party known by its Turkish acronym, C.H.P., has been broadcasting nearly continuously with live footage of the protests. There has been no move to block English-language news sources like CNN International or the BBC, which have covered the events extensively.

This has highlighted the shortcomings of the main domestic news providers, critics say. One picture that has made the rounds widely on social media juxtaposes coverage on CNN International and CNN Turk, a Turkish-language news channel owned by Dogan. In the picture, CNN International shows fiery protest footage, CNN Turk a nature documentary featuring cuddly penguins.

A spokesman for Time Warner’s Turner division, which operates CNN International, said the Turkish channel, which operates under license from Time Warner, is editorially independent from the English-language news outlet. The broadcast of the penguin program occurred in the wee hours of Saturday morning, after the channel had already broadcast coverage of the Friday demonstrations, a Turner spokesman in London said.

“CNN is continuing to closely monitor the reporting of the protests in Turkey on our own channel, on our broadcast affiliates and across the competition,” the company said in a statement.

While the Turkish government says international coverage of the protests has been exaggerated, critics argue that the arrest of Twitter users shows Mr. Erdogan’s authoritarian instincts, including an intolerance for protests that would be considered legitimate elsewhere.

“I didn’t see a lot of messages saying ‘Attack the police,’” said Yaman Akdeniz, a law professor at Bilgi University who specializes in free-speech issues. “I saw more saying, ‘Gather in this or that place.’ It is unacceptable in a democratic society to use these sorts of tactics to create a chilling effect on free speech.”

Mr. Erdogan is not alone among political leaders in singling out the role of social media in fomenting street violence. After riots last year in London, Prime Minister David Cameron of Britain pushed — unsuccessfully, so far — to create new powers to monitor digital communications.

Twitter declined to comment on Mr. Erdogan’s accusations, or on the arrests. In the past, the company has declined to disclose the identities of its users without a court order in the United States, where the company is based.

There are signs that worried, but Internet-savvy, Turks are turning to technologies that allow them to mask their digital identities. AnchorFree, a company that provides a virtual private network application called Hotspot Shield, said it had counted more than 98,000 downloads from Turkey on Saturday alone, or about 10 times the normal daily volume from that country.

“Without Twitter, without social media, there is no democracy,” said Mr. Akdeniz, the law professor. “Turkish society, everyone from the prime minister on down, needs to reflect on that.”