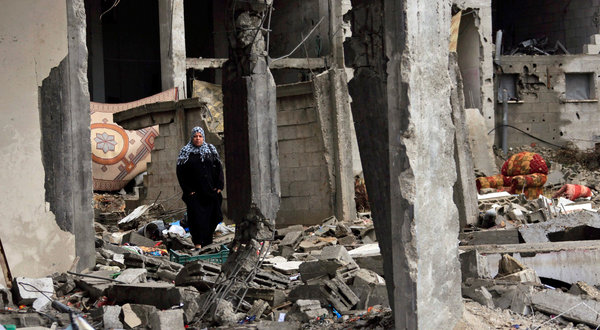 RAMALLAH, West Bank — For years, the United States and its Middle East allies were challenged by the rising might of the so-called Shiite crescent, a political and ideological alliance backed by Iran that linked regional actors deeply hostile to Israel and the West.

But uprising, wars and economics have altered the landscape of the region, paving the way for a new axis to emerge, one led by a Sunni Muslim alliance of Egypt, Qatar and Turkey. That triumvirate played a leading role in helping end the eight-day conflict between Israel and Gaza, in large part by embracing Hamas and luring it further away from the Iran-Syria-Hezbollah fold, offering diplomatic clout and promises of hefty aid.

For the United States and Israel, the shifting dynamics offer a chance to isolate a resurgent Iran, limit its access to the Arab world and make it harder for Tehran to arm its agents on Israel’s border. But the gains are also tempered, because while these Sunni leaders are willing to work with Washington, unlike the mullahs in Tehran, they also promote a radical religious-based ideology that has fueled anti-Western sentiment around the region.

Hamas — which received missiles from Iran that reached Israel’s northern cities — broke with the Iranian axis last winter, openly backing the rebellion against the Syrian president, Bashar al-Assad. But its affinity with the Egypt-Qatar-Turkey axis came to fruition this fall.

“That camp has more assets that it can share than Iran — politically, diplomatically, materially,” said Robert Malley, the Middle East program director for the International Crisis Group. “The Muslim Brotherhood is their world much more so than Iran.”

The Gaza conflict helps illustrate how Middle Eastern alliances have evolved since the Islamist wave that toppled one government after another beginning in January 2011. Iran had no interest in a cease-fire, while Egypt, Qatar and Turkey did.

But it is the fight for Syria that is the defining struggle in this revived Sunni-Shiite duel. The winner gains a prized strategic crossroads.

For now, it appears that that tide is shifting against Iran, there too, and that it might well lose its main Arab partner, Syria. The Sunni-led opposition appears in recent days to have made significant inroads against the government, threatening the Assad family’s dynastic rule of 40 years and its long alliance with Iran. If Mr. Assad falls, that would render Iran and Hezbollah, which is based in Lebanon, isolated as a Shiite Muslim alliance in an ever more sectarian Middle East, no longer enjoying a special street credibility as what Damascus always tried to sell as “the beating heart of Arab resistance.”

If the shifts seem to leave the United States somewhat dazed, it is because what will emerge from all the ferment remains obscure.

Clearly the old leaders Washington relied on to enforce its will, like President Hosni Mubarak of Egypt, are gone or at least eclipsed. But otherwise confusion reigns in terms of knowing how to deal with this new paradigm, one that could well create societies infused with religious ideology that Americans find difficult to accept. The new reality could be a weaker Iran, but a far more religiously conservative Middle East that is less beholden to the United States.

Already, Islamists have been empowered in Egypt, Libya and Tunisia, while Syria’s opposition is being led by Sunni insurgents, including a growing number identified as jihadists, some identified as sympathizing with Al Qaeda. Qatar, which hosts a major United States military base, also helps finance Islamists all around the region.

In Egypt, President Mohamed Morsi resigned as a member of the Muslim Brotherhood only when he became head of state, but he still remains closely linked with the movement. Turkey, the model for many of them, has kept strong relations with Washington while diminishing the authority of generals who were longstanding American allies.

“The United States is part of a landscape that has shifted so dramatically,” said Mr. Malley of the International Crisis Group. “It is caught between the displacement of the old moderate-radical divide by one that is defined by confessional and sectarian loyalty.”

The emerging Sunni axis has put not only Shiites at a disadvantage, but also the old school leaders who once allied themselves with Washington.

The old guard members in the Palestinian Authority are struggling to remain relevant at a time when their failed 20-year quest to end the Israeli occupation of Palestinian lands makes them seem both anachronistic and obsolete.

“Hamas has always argued that it is the future of the changes in the region because of its revolutionary nature, that it is part of the religious political groups who have been winning the revolutions,” said Ghassan Khatib, an official at Birzeit University and former government spokesman.

The Palestinian Authority’s leader, Mahmoud Abbas, will address the United Nations General Assembly on Thursday to request that it recognize Palestine as a nonmember state. The resolution is expected to pass, but analysts view it as too little, too late in the face of the new regional mood.

At a busy Ramallah bakery, that mood was readily evident.

“If this situation continues, so what if Abu Mazen gets recognition, so what?” said Salah Abdel Hamad, 50, a teacher, referring to Mr. Abbas. “It will not bring any substantial change.”

The bakery’s owner dared hang in the window a mourning poster for Ahmed al-Jabari, the Hamas military chief whose assassination by Israel helped to set off the latest conflict.

“The resistance,” said Tha’er al-Baw, 23, referring to Hamas, “proved that they are much better than the negotiating camp. In the days of Arafat, we used to think peace could be achieved through negotiations, but nobody believes this now.”

Even before the conflict, the emir of Qatar visited Gaza, promising $400 million in aid. Qatar did not donate that sum just to have its investment bombed to smithereens every few years.

Mr. Morsi changed little from Mr. Mubarak’s playbook, though his tone shifted. He sent his prime minister to lift morale. Ten foreign ministers, including those of Turkey and the newly Islamist government in Tunisia, also part of the new axis, visited Gaza during the fighting.

Egypt, Qatar and Turkey all want a more quiet, stable Middle East, which they have said repeatedly requires an end to the Israeli occupation. But the new Islamist governments do not talk about a two-state solution much, so analysts believe some manner of long-term truce is more likely.

“As Hamas moves closer to Turkey, Egypt and Qatar, it will be weaker as a ‘resistance’ movement because those three countries do not want a resistance movement,” said Talal Atrissi, a Lebanese academic specializing in Arab-Iranian relations.

Those countries will not supply arms, however, so Hamas will maintain contacts with Tehran. Khaled Meshal, the Hamas leader, told CNN that ties are “not as it used to be in the past, but there is no severing of relations.”

Where Hamas and Hezbollah were once allies, the fact that they are now at times at loggerheads illustrates the shift to the new Sunni axis.

A Western diplomat seeking to explain the changes recently drew a cross through the region, the meeting point representing Syria. Along the East-West line, he wrote “febrile crescent,” a play on the traditional “Fertile Crescent” used to describe the stretch of the Middle East where civilization began. The febrile crescent represents the volatile fault line between Sunnis and Shiites, with Syria the prize.

The other axis was labeled “Sunni Struggles,” representing the wrestling within the dominant Muslim sect over what governments and what ideology will emerge triumphant from the current political tumult. The deepest change, of course, is that the era of dictators seems to be closing.

“These are populist governments, which are much more attuned to the domestic public opinion than were previous regimes,” said Rashid Khalidi, an Arab studies professor at Columbia University. “Before the Arab revolutions you had a frozen situation where it was easy to see how things would go.”