Obama and the Palestinians – A fleeting visit 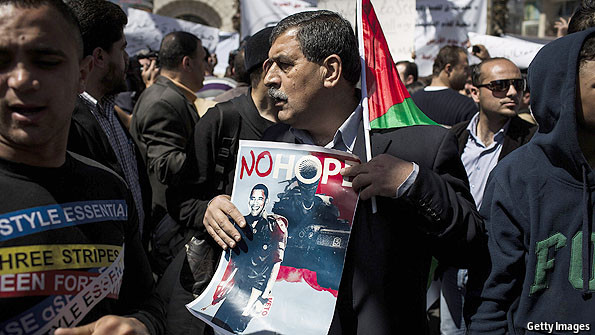 Palestinians spoke of an ill-wind from the West. A sandstorm shrouded President Barack Obama’s visit to Bethlehem, Jesus’ birthplace in the Israeli-occupied West Bank and the last-stop on this three-day tour to the holy land. Mr Obama’s outreach to Israel, they feared, had come at their expense. He visited the graves of Israel’s founders, but not that of Yasser Arafat, Palestine’s first president, despite parking his helicopter alongside when he visited the West Bank city of Ramallah. He repeatedly paid his respects to Jewish suffering and toured the Holocaust Museum, but could not utter the word “refugees”, say Palestinians, which might acknowledge the hundreds of thousands of Palestinians who lost their homeland in the 1948 and 1967 wars.

Underscoring the asymmetry in the relationship, Mr Obama spent three days in Israel and almost as many hours in Palestine. While he reached out to Israeli students, Palestinians were kept far away. A phalanx of security guards allowed people to enter a distant corner of Manger Square in Bethlehem, a few hundred metres away from the president, but no closer.

The lacklustre welcome mirrored the Palestinians’ mood. While trimmers in Israel had been weeding the pavements for days, in Ramallah and Bethlehem there was barely a broom in sight. Posters from a protest rally against Mr Obama the previous day still blew in the wind. The blustery sandstorm spoilt the photo-ops. The Palestinian press offered no positive comments, and though the protests were largely small the police did nothing to muffle the expressions of anger.

Mr Obama’s message, said Palestinian officials, was as derisory as the choreography of his visit. On arrival in Ramallah, the seat of the Palestinian Authority which runs the West Bank, he implied that the onus was on Mahmoud Abbas, the PA’s president, to restart the political process. In their joint press conference, he echoed Israel’s demand that Mr Abbas abandon his pre-condition of an Israeli halt to settlement construction to talks, albeit more tactfully. It was time, said the president, to dispense with “old formulas and habits”, sidelining Palestinian concerns that Israel would again use extended negotiations to further build and settle inside a putative Palestinian state. So tense did the press conference seem that commentators likened it to Mr Obama’s first-term encounters with Israel’s prime minister, Binyamin Netanyahu.

For Palestinian negotiators, Mr Obama’s apparent rewriting of the old rules for peace-making makes the call to resume direct talks all the harder to swallow. Speaking in Ramallah, he seemed to reduce the five core issues outlined by previous American presidents to two, namely Israeli security and Palestinian borders. He made no mention of two others—Palestinian claims that East Jerusalem be their capital and the return of refugees; and he recommended that a third—Jewish settlement expansion in the West Bank—be addressed once a peace deal had been reached. To do otherwise, he said, would be to put the cart before the horse. Though he insisted that a future Palestinian state be independent, viable and contiguous, he backpedalled on a previous statement that the borders of 1967, predating Israel’s occupation, form the basis of a future Palestinian state, and dropped all mention of a timetable for concluding a deal. Further riling the Palestinians, he publicly endorsed Israel’s demand to be recognised as a Jewish state, which Palestinians take as an renunciation of what they claim is a UN-sanctioned right of refugees to return.

Mr Obama’s denunciation of the Palestinian Islamist movement, Hamas, could further cost Mr Abbas the domestic buy-in he needs to return to the table. While reaching out across Israel’s political divide, and shaking hands with Israelis opposed to the creation of a Palestinian state, Mr Obama repudiated Hamas, Palestine’s best-organised political force, for refusing to recognise Israel. Until now, Hamas leaders have said that they would not oppose negotiations for a two-state settlement, should they resume. By publicly excluding the Islamists, Mr Obama increases the risk they could again become spoilers. The few rockets fired from Gaza during Mr Obama are a reminder of the power the Islamists can muster.

In the wake of Mr Obama’s visit, some Palestinian officials mourned the absence of his predecessor, George Bush. Making a similar trip a decade earlier, Mr Bush spoke of the occupation on “1967” lands, stipulated that Jerusalem would be part of Israeli-Palestinian negotiations, and demanded that Israel stop settlement expansion and remove the 100-plus outposts in the West Bank which even under its laws it had not authorised. Unlike Mr Bush’s 2003 roadmap, Mr Obama offered no such formula to hold Israel to account.

Supporters of Mr Obama argue that he needs to woo the parties back to the table before dictating terms. But many observers remain unconvinced that Mr Netanayhu is serious about seeking a two-state settlement. Some Israeli officials suspect he would pocket the president’s new positions, and continue to play the blame-game with the Palestinians, accusing them of obstructing a deal. Certainly, Israel’s initial actions in the wake of Mr Obama’s visit suggested little in its posture has changed. Mr Obama praised Palestinian non-violent protests but within hours of his departure Israeli police began dismantling a small camp site Palestinians had erected during his visit in an attempt to hold onto E1, a strategic slither of West Bank land east of Jerusalem.