Labourers at construction giant Arabtec in the UAE complain of low pay, poor conditions and lack of annual leave 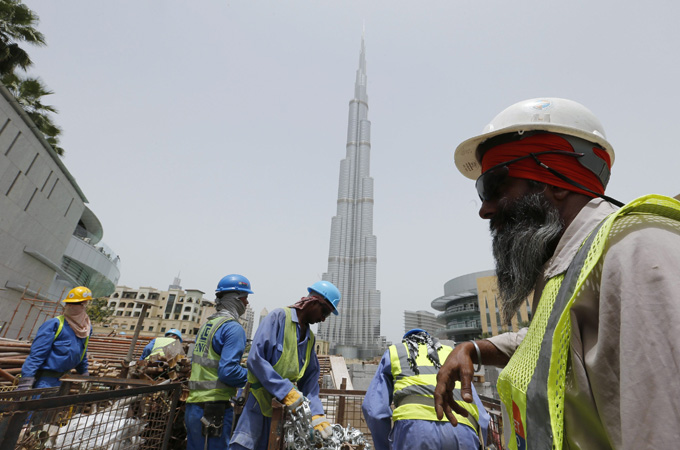 Dubai, United Arab Emirates – A strike by low-wage workers at Arabtec – the construction giant building the Louvre museum in Abu Dhabi, and a series of other megaprojects – has ended after police entered labour camps and immigration services issued a series of deportation notices.

United Arab Emirates security forces converged on camps operated by Arabtec on Monday, workers told Al Jazeera, and labourers continue to receive deportation orders as part of the fallout. Arabtec workers interviewed by Al Jazeera say they earn between $102-$325 per month, and send as much as they can back to their families in Bangladesh, India, Sri Lanka, Nepal and other countries.

Arabtec officials have said they were paying the workers according to their contracts. Unions and strikes by foreigners – who make up more than 90 percent of the private-sector workforce – are illegal in the UAE and across the oil-rich Gulf states.

Human rights groups liken the situation faced by workers to a form of 21st-century servitude, as labourers cannot change jobs without the permission of their sponsor and their migration status is controlled by employers.

Officials in the UAE have said workers chose to come to the Gulf because wages are better than in their home countries and working conditions have improved in the last five years, but rights groups and some labourers contend this is not true.

Al Jazeera interviewed a dozen employees working for Arabtec outside of several different labour camps across Dubai. The camps are guarded by security and our correspondent could not get inside. The names of workers have been changed to protect their identities, and Al Jazeera decided against publishing pictures of their faces.

A call to Arabtec’s media office rang unanswered Thursday, and an emailed request for comment was not returned.

These are some of the stories – in their own words – of the labourers who have built Dubai structures including the world’s tallest building, massive man-made islands and “seven-star” hotels:

I have not gotten a raise in the last nine years. The strike ended because of pressure from higher management and police. People are scared. It is possible this will happen again because conditions are so bad.

I haven’t been allowed to take annual leave in the last three years because there is too much work to be done. [UAE labour law guarantees workers 30 days of annual leave]

Thirty workers received a termination in the day shift and 53 in the night shift [after the strike].

This camp is good and there are no problems. The company is providing salaries on time. The company was planning to provide food to the sites every day and the workers said they didn’t want the food; they wanted 350 dirhams ($95) a month extra instead. Before there was no food provided by the company.

This month the workers already received their salaries. Maybe next month, they will get an extra 50 dirhams. I have not heard of any deportations and I have not talked to the police. Other camps have more people than this one.

I have been here for nine years. It [a strike] happened once before, five years back, and some people were deported.

I got a termination letter [after the strike]. I don’t know what will happen next. People in our camp were waiting to hear if news of protests would come from other labour camps, if they would also rise and raise their voices.

The leaders of the strike are safe, but we got termination for no specific reason.

Al Habtoor [another large contractor] pay their workers much better. With overtime, I have earned up to 1,200 dirhams in a month ($325). We can send home 700 dirhams in a good month. In this company, the basic salary is 700 dirhams [before overtime] … Nobody is getting the food they were promised.

If we formed a union and we had a leader, he would take our problems to management and they would just deport the leader. It would not work here.

[His phone rings and he chats with someone]

Between 20-25 people just got the [deportation] letter now.  Around 2,500 people live in our camp. When we got the news of the [first] deportations everyone came down shouting. When the police came, we just went back to our rooms. People were trying to be part of the group without coming to the front. I don’t think the situation will improve.

My salary is 725 dirhams a month ($197). When I came here six years ago, the salary was 650 dirhams ($177). Two or three Bangladeshis [in my camp] got termination letters as a result of the strike. In this camp [alone], many hundreds were on strike. We wanted more money.

Everyone has gone back to work now and some have been terminated. I have to clean the water plants and all different parts of things. It’s difficult. I am doing the work of three men and getting paid only as one. It’s not good.

The foreman’s salary is increasing but ours is not. The foreman gets a raise of 500 dirhams ($136) each year. If we got that increment, there would be no strikes.

My visa will be cancelled. Other people in my room also got a termination letter. I haven’t had a salary increase since first coming here. This month we haven’t gotten paid. We are sweating, working hard in the hot sun and we aren’t getting benefits. We are working 12 hours a day. The office boys are getting benefits and their salaries are higher.

The foremen are from India, Pakistan and Nepal, not Bangladesh. They don’t talk to us politely. The company is building some big projects.

I am still an eligible bachelor. Here I just eat and work and sleep. There is nothing else in life.

When I went to the site, they sent me back to the accommodation. Security told me to go to my room and said they would tell me what would happen. I supported the strike, but I didn’t participate because of problems renewing my visa.

We are happy to be here; this is not our country. We could have left anytime. We are willing to work. We just want to stay here. We don’t want to go back.