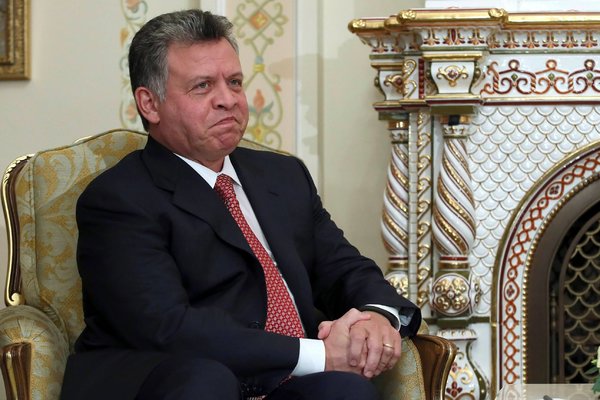 King Abdullah II of Jordan leads one of the smallest, poorest and most vulnerable Arab nations. But that does not stop him from looking down on many of those around him, including the leaders of Egypt, Turkey and Syria, as well as members of his own royal family, his secret police, his traditional tribal political base, his Islamist opponents and even United States diplomats.

President Mohamed Morsi of Egypt has “no depth,” King Abdullah said in an interview with the American journalist Jeffrey Goldberg, to be published this week in The Atlantic magazine. Prime Minister Recep Tayyip Erdogan of Turkey is an authoritarian who views democracy as a “bus ride,” as in, “Once I get to my stop, I am getting off,” the king said.

And he said President Bashar al-Assad of Syria is so provincial that at a social dinner he once asked the monarchs of Jordan and Morocco to explain jet lag. “He never heard of jet lag,” King Abdullah said, according to an advance copy of the article.

The king’s conversations with Mr. Goldberg, an influential writer on the Middle East and an acquaintance of more than a decade, offer a rare view of the contradictory mind-set of Washington’s closest ally in the Arab world as he struggles to master the upheaval of the Arab Spring revolts. Seldom has an Arab autocrat spoken so candidly in public.

King Abdullah appears humbled and even fatigued by the many challenges he failed to foresee when he inherited the throne 14 years ago, describing himself before coronation as a “Forrest Gump” in the background of his father’s long reign. In contrast to his father, King Hussein, King Abdullah promises to move Jordan closer to a British-style constitutional monarchy, and thus to stay ahead of the Arab Spring wave.

But he insists that only he can lead the transition to democracy, in part to ensure that democracy will not deliver power to his Islamist opponents.

The era of Arab monarchies is passing, King Abdullah said. “Where are monarchies in 50 years?” he asked. But even his own family, with 11 siblings and half-siblings, does not yet understand the lessons of the Arab Spring for dynasties like theirs, he said, adding that the public will no longer tolerate egregious displays of excess or corruption.

“Members of my family don’t get it,” he said. “Look at some of my brothers. They believe that they’re princes, but my cousins are more princes than my brothers, and their in-laws are like — oh my God!” he continued.

Even his own sons should be punished if convicted of corruption, he insisted. “Everybody else is expendable in the royal family,” he said. “That is the reality of the Arab Spring that hit me.”

He blamed his own government’s secret police for blocking his efforts at political reform. For example, he charged that the secret police had conspired with conservatives in the political elite to block his attempts to open up more representation in Parliament toPalestinians, who make up more than half of Jordan’s population.

“Institutions I had trusted were just not on board,” he said, naming as an example the mukhabarat, or secret police. He said he had not realized at first how deeply “conservative elements” had become “embedded in certain institutions” like the mukhabarat. “Two steps forward, one step back,” he added.

Stopping the Islamists from winning power was now “our major fight” across the region, he said. He repeatedly mocked the Muslim Brotherhood, the pan-Arab Islamist movement behind the largest opposition party in the Jordanian Parliament and Mr. Morsi’s governing party in Egypt, calling it “a Masonic cult” and “wolves in sheep’s clothing.” And he accused American diplomats of naïveté about their intentions.

“When you go to the State Department and talk about this, they’re like, ‘This is just the liberals talking, this is the monarch saying that the Muslim Brotherhood is deep-rooted and sinister,’ ” King Abdullah said. His job, he said, is to dissuade Westerners from the view that “the only way you can have democracy is through the Muslim Brotherhood.”

The king was also frankly dismissive of the tribal leaders from the East Bank of the Jordan River who have traditionally formed his family’s base of support. “The old dinosaurs,” he called a group of East Bank tribal leaders, including a former prime minister, before a meeting with them in the town of Karak. “It’s all about, ‘I’ll vote for this guy because I am in his tribe,’ ” the king said of their political program.

Alarmed at the violence in neighboring Syria, King Abdullah said he had offered asylum and protection to the family of President Assad. “They said, ‘Thank you very much, but why don’t you worry about your country more than you worry about us?’ ”

“The monarchy is going to change,” the king vowed. His son will preside over “a Western-style democracy with a constitutional monarchy,” the king said, and not “the position of Bashar today.”