Jordan’s general election goes better than some had expected 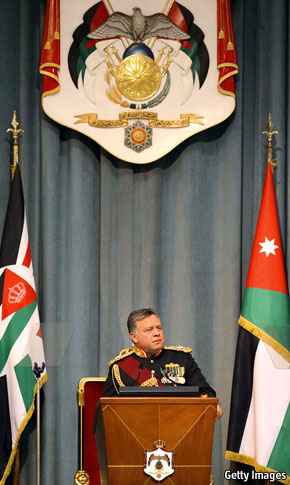 As the political dust settles after a general election at the end of January, King Abdullah can breathe a little more easily. He won applause from international monitors and got a respectable turnout despite a boycott by his most organised opposition, the Muslim Brotherhood, and by a posse of disgruntled former prime ministers. From the royalist point of view, it has been deemed a success.

Predictably the opposition still cries foul. Ballot boxes are said to have gone astray. Military men were noticed with purple dye on their index fingers, a telltale sign that they voted in violation of election rules that ban them from doing so. Some pollsters argue that, out of an adult population of 3.7m, only 35% voted, once soldiers, expatriates and those who refused to register are excluded, not the 56% the government claimed. Islamists decried the election for being rigged in favour of rural indigenous Bedouin, against the predominantly Palestinian masses in the towns, where the Brotherhood has its base.

Loyalists, on the other hand, hail the election of a few more Palestinians, women and trade unionists as proof that parliament has become more representative. But the East Bank tribesmen proved their staying power by retaining an overwhelming majority of seats, electing as Speaker a former interior minister who led a crackdown on Islamists some years ago. “The old guard is back,” says a friend of the king, disappointed that Jordan, in his view, has lost an historic opportunity to seal a deal with the Brotherhood and put the kingdom in harmony with the Arab awakening.

Abdullah’s timing was fortunate. The Brotherhood’s endorsement of violence in neighbouring Syria and its apparent slide towards autocracy in Egypt made it less attractive to many Jordanians. A rare bout of rioting in northern Jordan amid Brotherhood protests against a fuel-price rise late last year persuaded many that they were better off with the devil they knew. Even the Brothers seemed unsure whether to opt for reform within the system or to bid for change from without.

So, despite the Brotherhood’s boycott campaign to protest against the gerrymandered electoral system, on election day voters lined up without much fuss. On the Friday after polling day only a few thousand heeded the Brothers’ call to rally—and that was in solidarity with the al-Aqsa mosque in Jerusalem, not against the shortcomings of Jordan’s election. As a test of strength, the king won the latest round.

The belated arrival of cash from Gulf monarchs anxious to prop up one of their shakier peers may have helped. Jordanian newspapers heralded $200m from Saudi Arabia to support the budget along with another $300m for various projects. This may delay the lifting of electricity subsidies that Jordan has promised the IMF. That, after recent rises in the price of water, petrol, cooking fuel and food, might—feared the government—have pushed Jordan’s poor masses over the edge. For the moment they seem a bit calmer again.