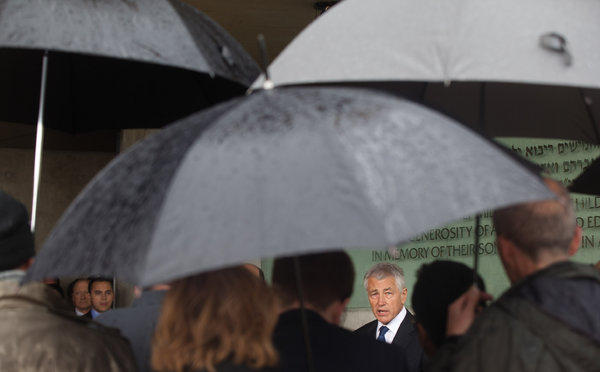 Defense Secretary Chuck Hagel opened a week-long visit to the Middle East on April 21, 2013, by pressing an American agenda focused on deterring Iran — including a significant new weapons deal for Israel — coupled with a strong caution that it would be premature for Israel to opt for unilateral strikes on Tehran’s nuclear program.

Mr. Hagel, who was subject to intense,even hostile scrutiny during his confirmation process over whether he was sufficiently supportive of Israel, hailed the “very special relationship” between the United States and Israel. He also repeatedly emphasized Israel’s right to defend itself “in a very dangerous, combustible region of the world.”

In preventing Iran from acquiring nuclear weapons, the United States has said that all options are on the table, including military action. But President Obama and his national security team have argued for more time to pursue diplomacy and economic sanctions. Some Israeli leaders, though, say the timeline for Iran to build a nuclear bomb is short, and they regularly speak of unilateral action.

In recent days, Israeli officials have again discussed their right to act against Iran. But American national security officials and military officers say it is unlikely that a strike by Israel would be sufficient to terminate Iran’s nuclear program or halt any ambitions by Tehran to obtain nuclear weapons. Iran has denied it seeks to build nuclear weapons and has said its enrichment program is for civilian use.

On Sunday, Mr. Hagel acknowledged that there might be “minor” differences between the United States and Israel on the timeline in which Iran might develop nuclear weapons.

“I think it’s important that we all keep our eye focused on the objective,” he said. “And there is no daylight there at all — that Iran is prevented from acquiring that nuclear capacity.”

The current regimen of multilateral economic sanctions on Iran is among the toughest, most effective ever applied, Mr. Hagel said. “We know through many measurements that those sanctions are hurting Iran — significantly.”

Even so, he acknowledged that diplomacy and sanctions were not guaranteed to succeed. “Military options, most of us feel, ought to be the last option,” he said.

During his travels, Mr. Hagel will be pushing forward with a $10 billion arms packageintended to further increase Israel’s military edge over other powers in the region while also bolstering the armed forces of two important Persian Gulf allies, Saudi Arabia and the United Arab Emirates.

Included in the weapons deal for Israel are tilt-rotor Osprey aircraft, which can be used for transporting troops and patrolling borders and nearby seas, as well as advanced radars for Israeli warplanes.

And two systems to be sold to Israel — a new generation of aerial refueling tankers and advanced missiles that home in on radar signals to destroy air-defense sites — would be important in any attack on Iran’s nuclear facilities.

Mr. Hagel said the weapons sales served as “another very clear signal to Iran.” But American officials also made it clear that the new arms should not be interpreted as tacit approval for Israel to accelerate planning for an attack on Iran.

An Israeli government official said one goal of the visit was to strengthen the personal relationship between Mr. Hagel and his Israeli counterpart, Moshe Yaalon, since both are new in their jobs. Mr. Yaalon, a former military chief of staff and minister of strategic affairs, was named defense minister in mid-March.

Israeli analysts noted that discussions between the two are expected to focus in part on how Israel will pay for the new weapons package. “An improvised solution is necessary,” Alex Fishman, a military affairs analyst, wrote Sunday in the newspaper Yediot Aharonot, adding, “If we have no money, we’ll be left with nothing but paper.”