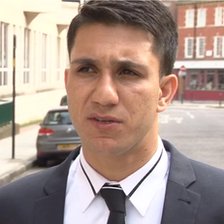 A teenager illegally smuggled into Kent four years ago has told an immigration tribunal he fears he will be killed if he is forced to return to Afghanistan.

Najib Hashimi, 19, is being forced to return because he turned 18 last year.

He is appealing against the Home Office decision, saying he was brought to the UK after his father and brother were murdered by the Taliban regime.

Judgment was reserved after the hearing in London, with Mr Hashimi due to hear the decision within two to four weeks.

Speaking after his case was heard, he said: “There’s not a lot I can do now, I just have to wait.”

He has been in the UK since 2009, living with a foster family in Faversham.

Steve and Michelle Griffiths have said he is “like a son” and his return to Afghanistan would leave a huge hole in the family’s life.

Mr Hashimi, who fled to Pakistan with his mother after his father and brother were killed, added: “If I lose this family I’m going to be in the same situation I was nearly five years ago.

“I lost my one family and I don’t want to lose a second one.”

Fearing for his life, his uncle and mother paid for him to be brought to the UK, where he arrived in Kent as an unaccompanied minor at the age of 14.

His mother, sister and uncle still live in Pakistan.

In March, he was told he was going to be deported, and was held at Dover’s immigration removal centre for five days before being granted a temporary reprieve.

The hearing, which was held at the Taylor House Immigration and Asylum Tribunal in London, was told that Mr Hashimi is a promising cricketer who plans to go to university.

Howard Cheng, representing Mr Hashimi, said his client was “at the risk of being targeted by the Taliban” if he returned to his homeland, adding: “If, having left Afghanistan at age 11, can we say that he will think like an adult who’s been raised by [Afghani] parents there?

“The appellant could be at risk as a result of being unattended.”

Paul Duffy, for the Home Office, told the hearing that the decision could not hinge on being a “popularity contest”.

He said: “We’re talking about a very popular person, he’s a credit to himself and his foster carers.

“But the ultimate problem in this context is it’s not a popularity contest.

The UK Border Agency has said individuals are returned to their countries if they do not need protection and have no legal basis to remain in the UK.