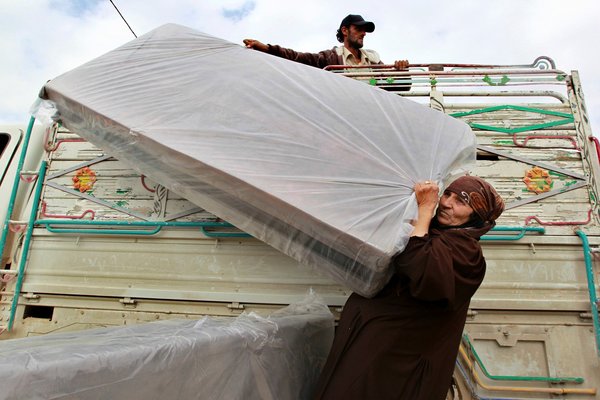 More than 6,000 Syrians have fled to Jordan in mid January, a record influx that prompted the Jordanian monarch, Abdullah II, to call Friday for more international aid, even as the Syrian government urged refugees to return in a bid that was met with broad skepticism among antigovernment activists.

The accelerating flight from Syria into Jordan and Lebanon has occurred as fighting has raged near the southern city of Dara’a and in the northern province of Homs, where an increasing number of villages have been nearly emptied of residents, according to antigovernment activists inside Syria and people who recently fled the area for Lebanon. The government has recently stepped up its offensive in Homs in what may be an effort to clear a route from the capital, Damascus, to the pro-government strongholds on the coast.

In the northern province of Idlib, rebels declared that they had taken over the central prison and freed scores of prisoners. Antigovernment activists posted videos of fighters prying open barred windows to allow prisoners to escape.

More than 4,000 Syrians arrived at the Zaatari camp in northern Jordan on Thursday, and another 2,000 overnight, according to Melissa Fleming, the spokeswoman for the United Nations High Commissioner for Refugees.

The influx, consisting mainly of families led by women, brought to more than 30,000 the number of Syrians reaching Zaatari this month, close to double December’s number, Ms. Fleming said, speaking in Geneva.

Many had come from the city and the suburbs of Dara’a, she said, describing a “real day-to-day struggle to survive” in the face of combat damage, the closure of medical facilities and shortages of food, water and electricity.

The Zaatari camp, which opened in July, already has some 65,000 people, and the agency said it was working with Jordan to open a second camp by the end of the month to initially accommodate 5,000 refugees and eventually some 30,000.

The refugee agency reported that it was trying to register Syrians elsewhere in Jordan and expected to have 50,000 by the end of February, but it noted that the Jordanian authorities say 300,000 Syrians have now entered the country. The number of Syrian refugees in the region is approaching 700,000, the refugee agency said, with 221,000 registered in Lebanon, 156,000 in Turkey and 76,000 in Iraq.

At the World Economic Forum in Davos, Switzerland, King Abdullah issued an urgent call for help.

“I cannot emphasize enough the challenges that we are all facing, both in Jordan and Lebanon, and it’s only going to get worse,” he said. “What we’re asking from the international community is not just to help us with the refugee problems and their challenges as they face this harsh winter, but also stockpiling in Jordan so that we can move supplies across the borders to keep people in place.”

Jordan’s fears for its own stability surfaced last week when the country’s prime minister, Abdullah Ensour, said that if the Syrian government collapsed, Jordan would not accept more refugees but would use its military to create safe havens inside Syria for those displaced by conflict.

Syria’s interior minister issued a call late Thursday for refugees to return to the country, promising that even those who fled without their identity cards would be welcomed back.

The government also said, in a statement on the state-run news agency SANA, that political opposition groups were free to enter the country to take part in a national dialogue aimed at creating a transitional government — and that they would be free to leave the country as well.

Government opponents commented widely on social media that the offer could be interpreted as a trap. The authorities also called on people to pray for peace on Friday, a day after the holiday celebrating the birth of the Prophet Muhammad.

State television showed hundreds of people praying at the Umayyad Mosque in central Damascus, as a senior cleric prayed for President Bashar al-Assad and asked God for “a miracle of your many miracles, to cleanse our country from oppression and of those rogues who commit injustice, murder and slaughter.”

In Homs, activists reported that the government was shelling the neighborhoods of Juret al-Shiyah and Khaldiyeh, which have been heavily damaged by months of fighting. They also said a family, including five children, had been found killed and burned at home.