President Trump said Tuesday he cannot let California cities continue to “destroy themselves” by failing to adequately address homelessness, as state and local officials look reluctantly to the federal government for help in combating the ongoing housing crisis within the nation’s most populated state.

“We have people living in our … best highways, our best streets, our best entrances to buildings … where people in those buildings pay tremendous taxes, where they went to those locations because of the prestige,” Trump continued. “In many cases, they came from other countries and they moved to Los Angeles or they moved to San Francisco because of the prestige of the city, and all of a sudden they have tents. Hundreds and hundreds of tents and people living at the entrance to their office building. And they want to leave. And the people of San Francisco are fed up, and the people of Los Angeles are fed up.” 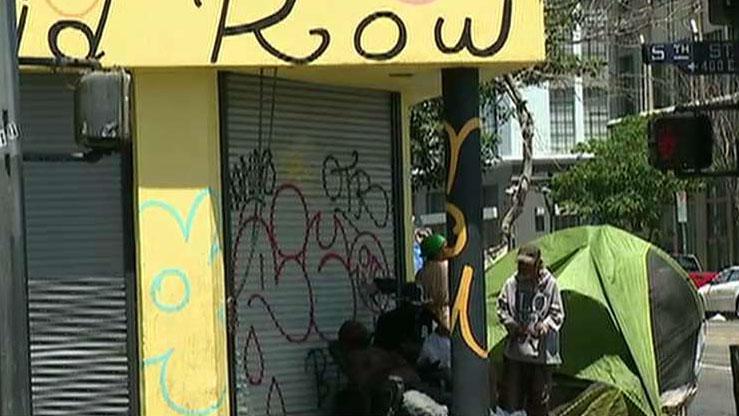 Earlier this week, Gov. Gavin Newsom, a Democrat, and several California mayors and county and state officials asked the Trump administration for 50,000 additional vouchers for those most affected by the housing crisis, the Los Angeles Times reported. In the letter signed Monday, they also requested the federal government provide incentives for landlords to accept the housing vouchers.

“That’s a pretty remarkable opportunity, if they’re sincere in their desires,” Newsom said at a news conference. “If they’re insincere and this is, God forbid, about something else — politics, not good policy — then they’ll reject it outright. I hope that’s not the case.”

The president’s two-day fundraising trip to California has been met with protests and swift criticism from celebrities aiming to prevent him from awakening Republican support in the Democrat stronghold state ahead of 2020.  Meanwhile, officials spoke of putting political differences aside briefly enough to welcome the president in a partnership in addressing homeless in the state together.

Los Angeles Mayor Eric Garcetti, a Democrat, said in a Facebook video post ahead of Trump’s arrival that he hoped the president would work with the city to end homelessness, but added he has not been invited to meet with the president during his stay on Los Angeles.

Trump said he would discuss possible solutions to California’s homelessness crisis with U.S. Department of Housing and Urban Development Secretary Ben Carson when he comes to join the president in the San Francisco Bay Area and then Los Angeles. Carson requested to meet with Los Angeles Police Department Chief Michel Moore to discuss housing issues, including homelessness. They are expected to meet Wednesday.

As Trump fails to announce possible policy proposals to address homelessness on the West Coast during his California trip, local officials are speculating that Trump plans to clear homeless encampments he referenced to reporters on Air Force One and move people to government operated shelters on federal land, the Los Angeles Times reported.

The Department of Justice and Los Angeles law enforcement union officials deliberated possible “workarounds” to circumvent court settlements, rulings and lawsuits that hinder the Los Angeles Police Department’s ability to clear homeless encampments from public property, according to the newspaper. On Monday, the White House also considered the option of deregulating the housing market to increase the supply of apartments, condominiums and homes in California.

Trump kicked off his two-day California fundraising trip Tuesday with a $3 million Bay Area luncheon at the home of Sun Microsystems co-founder Scott McNealy, to be followed by a $5 million Beverly Hills dinner at the home of real estate developer Geoffrey Palmer. He’s expected to bring in an additional $7 million on Wednesday with a breakfast in Los Angeles and luncheon in San Diego. Trump’s tour is to raise money for Trump Victory, a joint fundraising committee composed of the Trump campaign and the Republican National Committee, according to the Los Angeles Times.

Fox News’ Gregg Re contributed to this report.