Trump cites report Biden may scale back campaign schedule: ‘If I ever did that it would be over’

President Trump told New Hampshire rally-goers Thursday that the campaign of Joe Biden was a “disaster” following a report that the 2020 Democratic frontrunner may scale back his scheduled appearances following weeks of verbal gaffes.

“If I ever did that it would be over,” the president told the crowd in Manchester. “The fake news would get us.”

The president said that if Biden’s campaign advisers limit the former vice president’s media exposure before next year’s election, it could cost him the White House.

In the report, published Thursday by The Hill, unidentified “Biden allies” suggest that Biden limit his campaign stops before the 2020 election to minimize the bad publicity resultiung from his verbal blunders. The allies claim that cutting back on appearances would also prevent critics, including President Trump, from suggesting the 76-year-old Biden is too old and not mentally fit to be president.

At Thursday’s rally, Trump tried to draw a sharp contrast between himself and the former U.S. senator from Delaware.

“Is there anything better than a Trump rally?” Trump asked the crowd, drawing cheers.

“What about a ‘Sleepy Joe Biden’ rally?” he then asked, drawing laughs. “I think Sleepy Joe may be able to limp across the finish line. But today they announced that they’re going to cut way back on his appearances because he is such a disaster.”

Biden has faced a weeks-long flurry of negative attention surrounding verbal slip-ups that some noted have been a common occurrence across his long political career. For example, Biden recently claimed to support “truth over facts” during a speech at the Iowa State Fair. He also incorrectly stated that two high-profile mass shootings occurred in Michigan and Houston, instead of the correct locations of Dayton, Ohio, and El Paso, Texas. 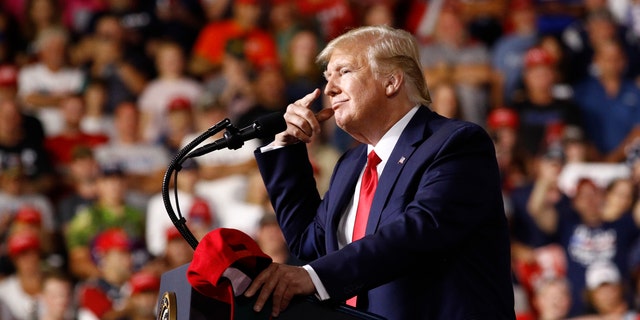 In response to one of Biden’s gaffe’s, Trump tweeted last week: “Does anybody really believe he is mentally fit to be president? We are ‘playing’ in a very big and complicated world. Joe doesn’t have a clue.”

A Fox News Poll published Thursday showed Biden ahead of Trump by 12 points. On Tuesday, Biden slammed President Trump’s own choice of words when speaking about white nationalism and diversity.

“President Trump has emboldened white nationalists with messages of support, called Mexicans “rapists,” and told members of Congress to “go back” to where they came from,” Biden wrote on Twitter. “The words of a president matter. And Trump has used his to unleash the deepest, darkest forces in our nation.”

Biden also claimed the president “doesn’t get” the role of diversity in the strength of America.

“This is America, and we are strong and great because of our diversity — not in spite of it,” Biden wrote. “Donald Trump doesn’t get that. Prioritizing wealthy immigrants while punishing working-class ones betrays the American idea that everyone gets a fair shot — regardless of background.”

“This is bad advice. You can’t cloister the candidate and win,” Axelrod tweeted. “He either can cut it or he can’t, and the only way he can prove he can is to be an active and vigorous candidate. He’s running for president of the United States, for God’s sake!”

Axelrod similarly took aim at Biden’s handling of federal funding for abortion. Biden has long supported the Hyde Amendment but video surfaced of him telling an activist that he would oppose it as president. Biden later said that he didn’t hear the activist’s question and eventually reversed his decadeslong support for the historically bipartisan measure.

Adding to the list of verbal gaffes, Biden mistakenly said he had met with students who survived a mass shooting at Marjory Stoneman Douglas High School in Parkland, Fla., while he was vice president. A gunman actually open-fired at the school in February 2018, about a year after Biden left the job.

During a speaking engagement for Asian and Hispanic voters last week, Biden also said that “poor kids are just as bright and just as talented as white kids.” Biden recanted his statement after the event, telling reporters he meant to say “wealthy kids” instead of “white kids.”

In Thursday’s report, “Biden allies” claimed limiting Biden’s speaking engagements would actually save his campaign. In the past, Biden made two previous attempts at running for president. In 1988, he ran unsuccessfully in a primary that was ultimately won by then-Massachusetts Gov. Michael Dukakis. In 2008 he ran again but the Democratic Party nomination ultimately went to then-Sen. Barack Obama, D-Ill., who chose Biden as his running mate.