Production of opium by Afghans is up again 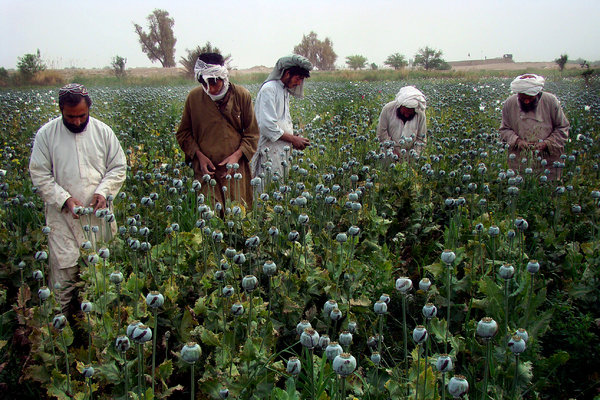 For the third year in a row, opium cultivation has increased across Afghanistan, erasing earlier drops stemming from a decade-long international and Afghan government effort to combat the drug trade, according to a United Nations report released on Monday.

The report’s findings raised concerns among international law enforcement officials that if the trend continued, opium would be the country’s major economic activity after foreign military forces depart in 2014, leading to the specter of what one official referred to as “the world’s first true narco-state.”

Afghanistan is already the world’s largest producer of opium, and last year accounted for 75 percent of the world’s heroin supply. “The assumption is it will reach again to 90 percent this year,” said Jean-Luc Lemahieu, the United Nations’ top counternarcotics official here.

The report, the Afghanistan Opium Risk Assessment 2013, issued by the United Nations Office on Drugs and Crime and based on extensive surveys, found that opium cultivation had increased in 12 of the country’s 34 provinces. Herat, in western Afghanistan, is the only province in which cultivation is expected to decrease, the report said.

The report suggests that Taliban insurgents took advantage of insecurity in several provinces to assist opium farmers and win popular support — protecting an important form of income for their operations. Opium cultivation has increased the most wherever there has been insecurity.

Over all, the number of acres devoted this year to opium poppy cultivation is expected to top the figure in 2008, when poppy plantings reached a peak of 388,000 acres, Mr. Lemahieu said. After 2008, eradication efforts, as well as a cash incentive program for provinces that eradicated all opium poppy crops, helped reduce cultivation drastically through 2010.

This year three provinces — Balkh, Faryab and Takhar in the north and west — are in danger of losing their poppy-free status, according to the United Nations report. They are among 16 provinces that had been declared poppy-free; such provinces receive $1 million awards from the American Embassy, paid directly to the governor’s office.

In February, the State Department announced that it was handing out $18.2 million in Good Performers Initiative Awards for reducing poppy cultivation in Afghanistan. A spokesman for the American Embassy emphasized that the awards were meant to be incentives for provinces to remain poppy-free.

Opium production has become particularly high in Helmand Province in the south, the country’s major opium-producing area, and in Kandahar Province. In both places, the surge of American troops helped to beat back Taliban influence, but as those troops returned home last year, cultivation increased sharply. More than 70 percent of opium production now takes place in three provinces where the surge occurred.

“This country is on its way to becoming the world’s first true narco-state,” said one international law enforcement official, who did not want to be quoted criticizing the Afghan government. “The opium trade is a much bigger part of the economy already than narcotics ever were in Bolivia or Colombia.”

But Mirwais Yasini, a former head of counternarcotics for the Afghan government and now a prominent member of Parliament, said, “I wouldn’t go that far.”

“But if it goes on like this in the future, I am worried about that happening,” he said.

Mr. Yasini said eradication efforts had been countered by insecurity, compounded by corruption at local, provincial and national levels. “I don’t see anything tangible that has been done,” he said. “There is no meaningful crop substitution and no effective enforcement.”

The United Nations has estimated in the past that opium trafficking makes up 15 percent of Afghanistan’s gross domestic product, a figure that is expected to rise as international military and development spending declines with the NATO withdrawal at the end of 2014.

The mining sector, the other big hope of economic self-sufficiency for Afghanistan, is still moribund as the Afghan Parliament continues to bicker over a mining law. A lack of security and legal clarity has also prevented the large-scale exploitation of mineral resources.

The increase in opium poppy cultivation is attributed mainly to historically high prices for opium, coupled with insecurity. Prices began rising in 2010 when a poppy blight severely reduced crop yields, but they have remained high since. Farmers earn as much as $203 a kilogram for harvested opium, compared with only 43 cents a kilogram for wheat or $1.25 for rice, according to the report.

Mr. Lemahieu praised the efforts of the Afghan Ministry of Counternarcotics, but said international donors had greatly underfinanced critical programs to combat trafficking, with only $300,000 of a requested $11 million pledged this year.