U.S. Sen. Kyrsten Sinema may face a censure vote by Arizona’s Democratic Party because she votes too often in favor of President Trump’s agenda, according to a report.

Since joining the Senate in January, Sinema has opposed Trump 81 percent of the time, The Arizona Republic reported, citing data from the FiveThirtyEight Trump Tracker.

That’s apparently not often enough to satisfy many of her fellow Democrats in the Grand Canyon State.

“Here’s the thing: We really support Kyrsten Sinema, we want her to succeed, we want her to be the best senator in the country,” Dan O’Neal, state coordinator for Progressive Democrats of America, told the Republic. “But the way she is voting is really disappointing. We want Democrats to vote like Democrats and not Republicans.” 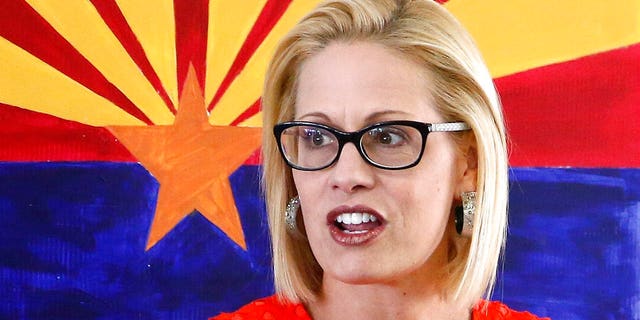 Sinema’s moderate voting record has helped her win some GOP backing in the state, according to the newspaper, but several votes in particular have riled progressive Democrats.

Those votes include Sinema’s support for David Bernhardt, Trump’s pick for secretary of the Interior, and for William Barr, the U.S. attorney general.

Sinema also opted not to back “net neutrality” rules favored by other Democrats, the newspaper reported

In July, she was one of several Democrats who called for the implementation of a pilot program that would work to quickly identify and deport migrants at the border who are judged not to have a valid asylum claim.

In April she came out firmly against launching impeachment hearings against President Trump in the wake of Special Counsel Robert Mueller’s Russia report.

Sinema, 43, a native of Tucson, previously served in the U.S. House, where she backed President Trump even more often, according to the Republic.