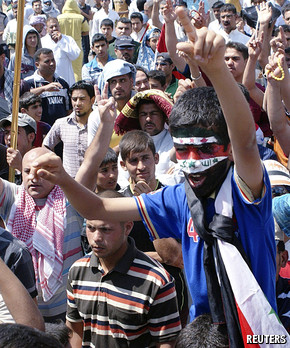 THE chants that rose from a furious crowd of mourners in the city of Kirkuk on April 24th were hardly subtle. “Death to Maliki!” cried some among the throng of thousands, referring to Iraq’s prime minister, Nuri al-Maliki. “Revenge against the agents of Iran!” chimed others, underscoring the bitterness with which the Sunni Arabs who dominate one side of the city regard the Shia-led government in Baghdad. The day before, security forces had shot dead at least 27 Sunni protesters in Hawija, a town half an hour’s drive to the west.

The killings marked the sharpest rise in sectarian tension in recent months, as Sunnis across a swathe of northern and western Iraq mounted protests against Mr Maliki’s government. His security men had hitherto responded with wary restraint. However, provoked by the killing of a soldier in Hawija on April 19th, they had besieged a sit-in by several hundred Sunnis. Despite efforts by Sunni politicians to negotiate an end to it, troops stormed in at dawn on April 23rd. An army statement said the demonstrators had been “infiltrated by Baathist and al-Qaeda elements”. Besides, three soldiers had been killed.

This has precipitated the biggest crisis in Iraq since American troops left in December 2011. Sunni protesters in the provinces of Anbar and Nineveh declared a general strike amid an outburst of clashes with army and police that have so far left scores more dead. Two Sunni members of Mr Maliki’s cabinet resigned, raising to four the number of Sunni ministers to abandon the government since March 1st, while Sunni-dominated political parties said they would boycott the parliament.

More ominously still, some sheikhs of Sunni tribes joined religious figures to declare that a “red line” had been crossed. Henceforth, they warned in widely circulated videos, activists would be armed and ready to hit back against the army. Among the myriad Sunni protest groups, several suggested a shift towards the tactics of al-Qaeda, which has been blamed for sporadic bombing attacks not only on Shias but also on fellow Sunnis tarred as “collaborators” with the government in Baghdad. The spectre looms of Iraq following the path of Syria, where the regime’s brutality turned a peaceful uprising into an armed and increasingly sectarian revolt.

With the departure of Sunni ministers and anger on Sunni streets, Iraq’s already shaky political apparatus may find it hard to stem a slide into general violence. Mr Maliki has ordered an inquiry into the Hawija incident, chaired by Saleh al-Mutlaq, one of the few top Sunni politicians with whom he is still on talking terms. But the prime minister, despite the reflexive backing he may count on from Shias, who make up some 60% of Iraq’s population, has lately been weakened by a boycott of his government by Kurdish ministers and members of his federal parliament, as well as by sniping from Shia politicians.

The outcome of elections held in 12 of Iraq’s 18 provinces on April 20th may weaken him more; polls were postponed in the largely Sunni, Kurdish or mixed provinces. During the run-up the assassination of at least 14 candidates, all Sunnis, further dampened Sunni enthusiasm for voting, but even in the quieter Shia-dominated parts of Iraq, the turnout was low.

Full results are not yet in, but early estimates suggest a sharp decline in seats for Mr Maliki’s State of Law coalition and perhaps a loss of its outright majority of provincial-council seats. Mr Maliki looks increasingly beleaguered, not just among Sunnis, but among fellow Shias, too.