Iraqis root for the home team, and Syrian visitors 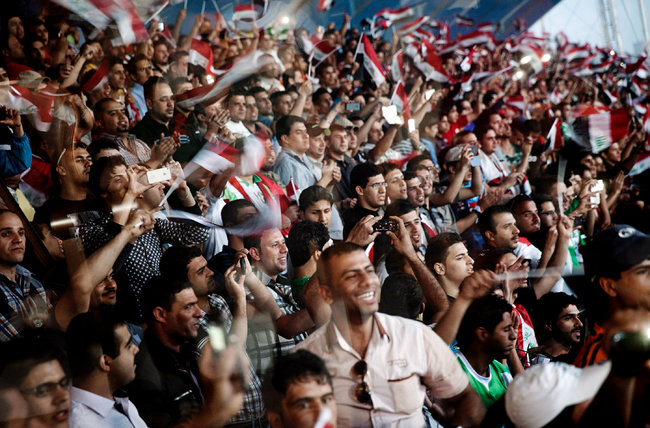 Iraq’s national soccer team played Syria on the greenest patch of grass in Baghdad the other night, under bright lights that mostly stayed lighted, before tens of thousands of Iraqis cheering on their own and the Syrians, too.

The fans roared when the Syrian team emerged from its dressing room, and roared again after it scored a goal in the second half.

“Syria, Syria remains in our heart!” was one chant.

“Bashar, Bashar remains in our heart!” was another.

Up high in a glass-enclosed suite, where ministers, members of Parliament and their well-connected hangers-on took in the game, two Syrian men in the front row had draped themselves in the flag of their embattled country and were holding placards of their president, Bashar al-Assad.

“Iraq was also subject to terrorism,” said one of the men, Yasir Dandah, 19, referring to the Syrian government’s portrayal of the uprising against Mr. Assad as a wave of terrorism. “That is why they are sympathetic to us.”

Left unsaid was that many of the insurgents who flooded into Iraq during its own civil war came from Syria. But now that Syria finds itself in the middle of its own bloody civil war, many of Iraq’s Shiites, a majority here, have sided with the Syrian government as it fights a Sunni-led rebellion.

That sentiment found its expression on Tuesday night in the chants of the fans, who seemed as intent on welcoming the visitors as on cheering for the home team. It seemed almost incidental that Iraq beat Syria, 2-1.

Down in the cheap seats, vendors worked the crowd, selling cigarettes and nuts and ice cream bars from plastic foam coolers. “Syrians are our brothers,” said one fan, Ali Hadi, 23, as the teams warmed up.

Days earlier, FIFA, soccer’s international governing body, lifted the ban on international competition in Baghdad — but only for friendly matches for now. The restriction had been in place because of fears of violence and worries that Iraq’s shaky electrical grid would not keep the field illuminated long enough to complete a game.

Neither problem materialized on Tuesday night. The crowd was kept safe by a heavy security presence that included heavily armed soldiers patrolling the crowd, armored vehicles ringing the stadium and helicopters buzzing overhead.

A brief failure of one of the lighting towers during the second half — not unlike what happened at the Superdome in New Orleans during the Super Bowl last month — was explained by officials as an act of sabotage and not a problem with the electrical system, and the teams played on.

For everyone, it seemed, the game meant more than just the action on the field.

Gesturing toward the sea of people and the thousands of fluttering black, red and white Iraqi flags, Mr. Shamki said: “You don’t know who is Sunni or Shia or Christian. They are just chanting for Iraq.”

The fans also cheered for something more, at one point breaking into the chant, “Sunnis and Shiites, we are all brothers!”

Here, as elsewhere, sports links generations and soothes the vicissitudes of life. So on a pleasant spring evening, a week after nearly 20 car bombs struck around the city, killing dozens, almost 50,000 people came to dilapidated Shaab Stadium, which was built in the 1960s as a gift from a Portuguese foundation and more recently served as a base for American soldiers.

Hours before the game, fans began showing up to buy tickets. Those that could not get in jammed cafes around the city to watch, or listened on the radio, stuck in traffic.

Some said that the cheers of support for the Syrians were as much an expression of Arab hospitality toward a visitor as taking sides in a civil war.

“Iraqis have a sports soul,” said Samer Edaan, 56, who manages a soccer team for police officers in a local league, as he sat in the V.I.P. suite before the game.

“We have to cheer up our guests,” he said. “If Syria scores they will cheer because they are our guests.”

As a boy, Mr. Edaan went to the opening of the stadium in 1966 for a match between Iraq and a club from Lisbon that was attended, he said, by Iraq’s president at the time.

“I cried because of my happiness when I walked in to the stadium today,” Mr. Edaan said.

In the suite, a man wearing a dishdasha, the traditional gown, and an Arab headdress walked among the high-powered fans pouring sips of bitter coffee from a golden spout into tiny porcelain cups. Standing amid the crowd was Mehdi Jassim, well known in Iraq for leading cheers during games. In the 1960s, he used to sell nuts at games with his uncle and also recalled being at the opening of the stadium, when the Iraqis lost to the Portuguese.

For years, amid the violence that engulfed the country, Iraq’s national team played mostly abroad, with one exception being a friendly match against the Palestinians in 2009.

“It’s like a lover has returned,” Mr. Jassim said. “It brings my soul back again, to see the people and the cheering and the energy and the flag of one Iraq.”