Despite assertions to the contrary, Iraq’s Kurds are inching towards outright independence 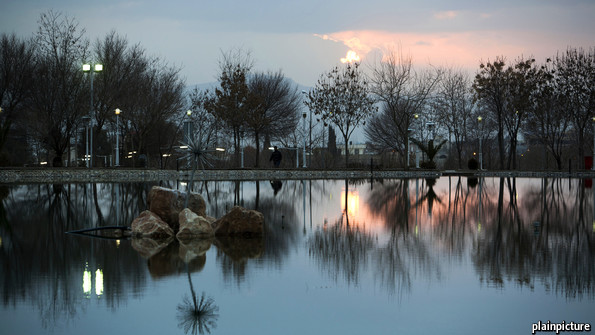 BIBLE scholars say the Garden of Eden was in southern Iraq, perhaps where the rivers Tigris and Euphrates meet. But when Iraqis think of earthly paradise they tend to look north, towards Kurdistan. It is easy to see why. Over Nowruz, the spring holiday celebrated last month, picnickers flocked to the autonomous region’s flower-speckled meadows and valleys carved by streams flowing down from snow-capped mountains.

Nature is not Iraqi Kurdistan’s only draw. The relative order, security and wealth enjoyed by the 5m residents of Iraq’s three Kurdish provinces are the envy of the remaining 25m who live in the battered bulk of Iraq, and of others too. Since 2011 some 130,000 Syrian refugees, nearly all of them ethnic Kurds, have been welcomed in as brothers; the UN says that number could reach 350,000 by the year’s end. From the east come Iranian Kurds eager to work on the building sites that bristle across a territory the size of Switzerland. From the north come plane-loads of Turkish businessmen seeking profit from a land so rich in oil that its sweet, cloying smell hangs everywhere. Iraq is now Turkey’s second export market after Germany, with 70% of that trade directed to the Kurdish part; 4,000 trucks cross the border daily.

It was not always like this. Surveying a dusty vista of tents at Domiz, a camp housing more than 50,000 destitute Syrians outside the booming city of Dohuk, an Iraqi Kurd shrugs and says, “Twenty years ago this was us.” He is referring to the aftermath of the Anfal, a campaign in the late 1980s by Iraq’s then-leader Saddam Hussein to crush a Kurdish uprising. It left at least 100,000 dead, destroyed 4,000 villages and created 1m refugees.

The imposition of a UN haven allowed Kurdish fighters, thepeshmerga, to claw back control in 1991, but the landlocked autonomous region remained surrounded by suspicious powers. Iran, Syria and Turkey all feared that Kurdish nationalism would infect their own minorities. There was trouble within, too. Politics amplified a linguistic divide between Iraqi Kurdistan’s east and west, sparking a fratricidal war from 1994 to 1997.

Tensions from that time linger, along with complaints of greed and nepotism in the two ruling parties that dominate the Kurdistan Regional Government (KRG). Iraqi Kurds also yearn to see their de facto independence formalised. To Kurdish eyes this would mean keeping control of land that technically lies outside the three provinces recognised throughout Iraq as Kurdish, and in particular the multi-ethnic but historically Kurdish-tinted city of Kirkuk.

Yet most Kurds accept that patience has paid off, so far. Iraq’s American protectors have kept other foreign powers at bay. The KRG receives 17% of the Iraqi federal budget, now a hefty sum thanks to Iraq’s growing oil exports (though the Kurds’ share comes after a 30% deduction for “sovereign” Iraqi expenses).

Since the American-led invasion in 2003 Iraqi Kurds have rebuilt villages, raised GDP per person tenfold, maintained law and order and turned the peshmerga into a formidable army. Daily blackouts may plague Baghdad, but the KRG exports surplus power to adjacent Iraqi towns. Divided at home, the Kurds have united to deal successfully with the federal government, securing good terms in the 2005 constitution and high office in the capital.

Kurdish officials will not speak of independence yet. But several factors point towards a reckoning. One of these is the dismal state of the rest of Iraq. Battered by al-Qaeda bombings and worried by the likely fall of Syria’s pro-Shia government, a growing number of Iraqi Shias whisper that they should let the Kurds go, better to control what remains.

Meanwhile Nuri al-Maliki, Iraq’s increasingly dictatorial prime minister, has grown more confrontational towards the Kurds. In December he sent troops to Kirkuk, prompting the KRG to mobilise the peshmerga. In March, over Kurdish objections, the federal parliament passed a $118-billion budget that allotted just $650m to pay what the KRG claims is a $3.5 billion debt it owes foreign oil companies. The angry Kurds withdrew their federal ministers and MPs. They now have no official representation in Baghdad; Jalal Talabani, Iraq’s Kurdish president, whose easy-going charm has often soothed troubles, has been ill in Germany since December.

Whatever the current desires of politicians, oil finds may redraw Iraq’s borders. The Kurds say Iraq’s constitution frees autonomous regions to develop new fields, and have attracted big foreign firms with production-sharing deals that let them book reserves as assets. Baghdad says these are illegal; oil is the property of the people and all revenues must go to the central state. It is annoyed, too, that some of the 50-odd deals signed by the KRG fall in disputed territory.

So long as most of Iraq’s oil output came from the south, and so long as it controlled export pipelines, Baghdad held the upper hand. But Kurdistan turns out to have a lot of oil. Proven reserves are now put at 45 billion barrels, a third or less of Iraq’s total, but still nearly double America’s. Kurdish production capacity is rising fast. It should reach 1m barrels a day by 2015 and possibly 2m by 2020, says an executive at Genel, a British-Turkish firm that is Kurdistan’s biggest operator.

Squabbles with Baghdad have led to repeated shutdowns of the main pipeline to Turkey, but growing volumes go by tanker truck, solidifying a budding Kurdish-Turkish alliance that would have shocked both peoples only a few years ago. The KRG expects a pipeline to Turkey to be complete by September. Turkey, meanwhile, is keen to diversify away from reliance on Iran and Russia. It helps, too, that many of Turkey’s energy firms are politically close to the ruling Justice and Development (AK) party, which has, not coincidentally, lately made headway in securing peace with Turkey’s own Kurds. Officials in Ankara, the Turkish capital, hint that a deal is in the works, covering exploration, production and transport of both oil and natural gas.

This prospect alarms the government in Baghdad, and not only because Mr Maliki tends to see Turkey through sectarian lenses as a meddling Sunni behemoth. If Kurdistan secures independent oil wealth, other parts of Iraq could follow. This is a fear shared, oddly enough, by Iraq’s two biggest allies, Iran and the United States. The Americans have repeatedly moved to curb Kurdish ambitions while encouraging Baghdad to accommodate them. But the prize for both Kurds and Turks is starting to look too big for Iraq’s future to be settled with yet fuzzier compromises.