Democrats protest Trump ahead of, and during, his NH rally

MANCHESTER, NH – While President Trump was in New Hampshire’s largest arena on Thursday – holding his first campaign rally in this key battleground state since the eve of the 2016 election — Democrats were outside, offering a counterpoint to him and his policies.

A couple of hundred demonstrators gathered yards from the Southern New Hampshire University Arena were chanting, “Hey, hey, ho, ho. Donald Trump has got to go.”

In the crowd was Jennifer Buck of Webster. 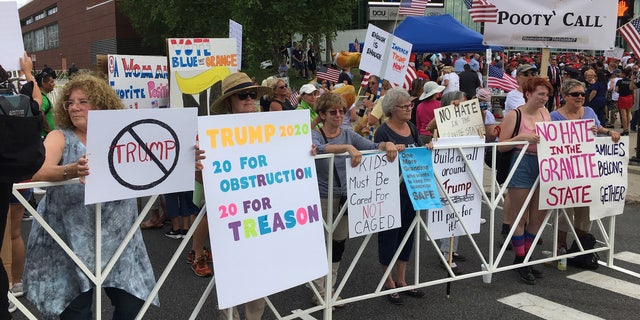 Anti-Donald Trump protests outside of the Southern New Hampshire University Arena in Manchester, NH, ahead of the president’s rally, on Thursday August 15, 2019

“I can stand this man anymore. I can’t stand what he’s doing to our country,” Webster told Fox News. “I can’t stand that he’s a white supremacist. He’s an embarrassment to the United States.”

TRUMP RETURNS TO NH EYEING BATTLEGROUNDS WON IN 2016 BY CLINTON

The counter-rally was organized by the New Hampshire Democratic Party and a number of state-based progressive groups.

State party communications director Holly Shulman stressed that “Trump’s failures and broken promises have made things worse for Granite State families, and we must stop him from being reelected.”

The party also went up with a sign on an electronic billboard a block from the arena that read, “In 938 days, Donald Trump Has Lied 12,019 Times.”

At a restaurant a few blocks north of the arena, New Hampshire campaign staff, volunteers and supporters of former Vice President Joe Biden held a  “response rally,” which they called “Stand Up to Hate.”

The campaign of former Texas Rep. Beto O’Rourke dropped a large banner at its state campaign headquarters – just a couple of blocks south of the arena, that read, “Hate is not welcome here.”

Trump’s rally was his first since the recent mass shootings in El Paso, Texas, and Dayton, Ohio. Democrats — and even some Republicans — have sought to blame the president’s divisive rhetoric on race and immigration that he’s used on Twitter and at campaign rallies as a contributing factor in the El Paso massacre in particular.

THE LATEST FROM FOX NEWS ON THE 2020 PRESIDENTIAL CAMAPIGN

On Thursday morning, Trump dismissed such criticism, saying in a local radio interview that “it’s become a soundbite. That’s what they want to do.”

Waiting to get into the arena hours before the president’s arrival: a throng of Trump supporters, mostly from New Hampshire and Massachusetts.

Rebecca Putnam of Falmouth, Mass., declared: “I’m half-black and I have no issues with what he’s doing. I don’t believe that he’s against people. I think that he’s right that if folks are going to come here and they’re going to be here, that they shouldn’t be sucking off our government subsidies.”

Putnam, who said she’s a small business owner, emphasized, “I believe that he’s making the economy better and increasing the jobs.”

Sabastian Agapite – who was wearing a VIP badge – made the drive from Cape Cod.

“It’s a once-in-a-lifetime opportunity to meet the president. I’m a big supporter,” he noted.

Trump’s crushing victory over his GOP rivals in New Hampshire’s first-in-the-nation presidential primary in February of 2016 launched him toward winning the Republican presidential nomination, and eventually, the White House.

But Trump lost New Hampshire to Hillary Clinton in the 2016 general election by less than 3,000 votes. This time around, he’s looking to take the state.

Near the top of his rally, Trump dismissed such polls, asking, “I’m tied with the Democrats in New Hampshire?”

He answered his own question, saying, “I don’t think so.”