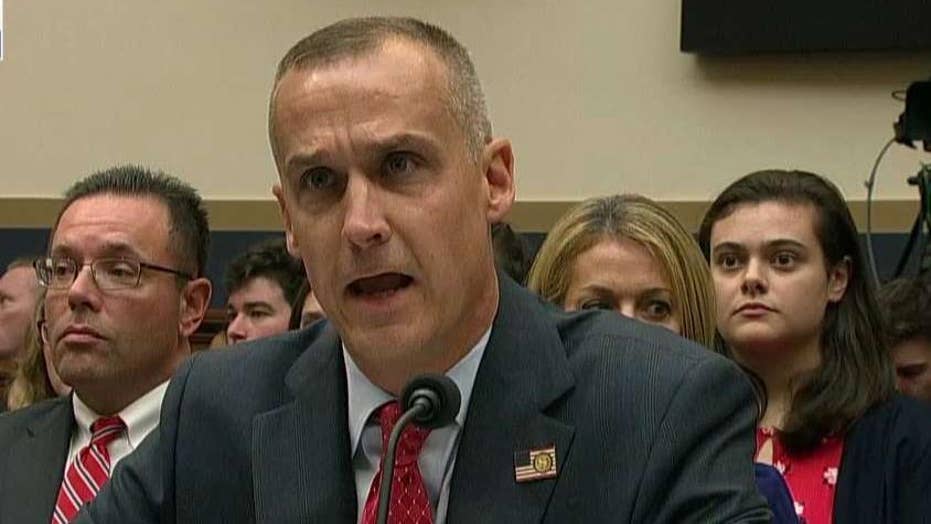 The House Judiciary Committee’s first hearing as part of its Trump impeachment investigation descended into chaos Tuesday as Democrats clashed with a combative Corey Lewandowski, trading insults and accusations with the former Trump campaign manager, who refused to answer many of their questions.

Lewandowski visibly frustrated committee Chairman Jerry Nadler, D-N.Y., during the Democrat’s first question – when the witness, in an apparent effort to stall for time, repeatedly asked Nadler to point to the specific section in the Robert Mueller report related to his question. Lewandowski was following White House orders not to discuss confidential conversations with the president beyond what was already public in the former special counsel’s report.

DOJ USES DEMOCRATS’ IMPEACHMENT CONFUSION AGAINST THEM IN COURT

Asked by Nadler if he met alone with President Donald Trump in June 2017, Lewandowski said, “Could you read the exact language of the report? I don’t have it available to me.”

“I don’t think I need to do that,” Nadler shot back. “I have limited time.” 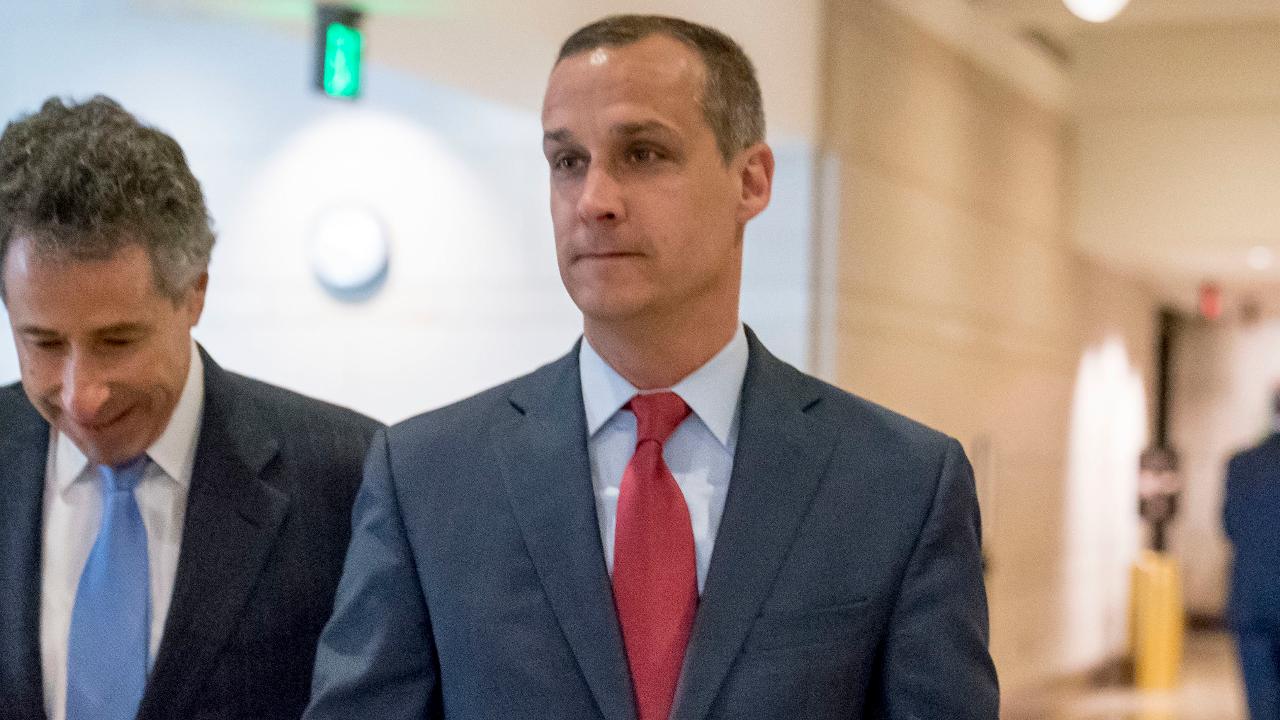 Asked the question again, Lewandowski told Nadler he needed him to “refresh” his memory of what was in the report. He demanded that Democrats provide him a copy of the report, sending Democratic staff scrambling to find one.

Amid the back-and-forth, the top Republican on the committee, Georgia Rep. Doug Collins, moved to adjourn the hearing, forcing a failed voice vote that caused further delay, before questioning resumed from other lawmakers.

Lewandowski later declined to play along with certain questions. New York Democratic Rep. Hakeem Jeffries asked Lewandowski if he was Trump’s “hitman, the bag man, the lookout, or all of the above?”

Lewandowski, considering a run for the Senate in New Hampshire in 2020, had been subpoenaed to testify about Mueller’s report. In a reminder of the political backdrop, during a recess, the witness tweeted out a link to a website promoting his possible candidacy. 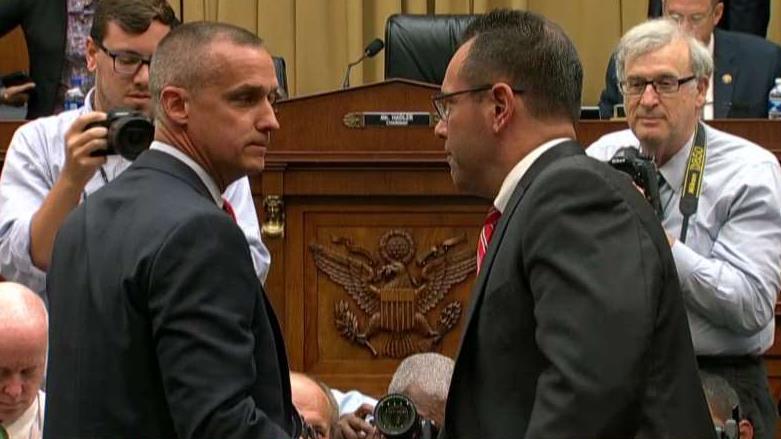 There were fireworks from the beginning. Nadler opened by saying the hearing is part of efforts to “determine whether to recommend articles of impeachment with respect to President Trump.” He railed against the White House’s efforts to block the testimony of two other former Trump aides — Rick Dearborn and Rob Porter — who did not show up on orders from the administration.

“This is a cover-up, plain and simple,” Nadler said of the White House’s efforts to block testimony from Dearborn and Porter.

At another point, Texas Rep. Sheila Jackson Lee told Lewandowski, “You are obviously here to block any reasonable inquiry into the truth or not of this administration.”

Lewandowski fired back that he was unable to give her a response because it wasn’t a question but a “rant.”

During his questioning, Georgia Rep. Hank Johnson said, “Mr. Lewandowski, you are like a fish being cleaned with a spoon — it’s very hard to get an answer out of you.”

Democrats repeatedly asked questions about Mueller’s report, saying Trump asked Lewandowski to direct then-Attorney General Jeff Sessions to limit Mueller’s investigation. Trump said that if Sessions would not meet with Lewandowski, then Lewandowski should tell Sessions he was fired. Lewandowski never delivered the message but asked Dearborn, a former Sessions aide, to do it. Dearborn said he was uncomfortable with the request and declined to deliver it, according to the report.

Tennessee Democratic Rep. Steve Cohen — who once brought a bucket of fried chicken to a hearing after Attorney General Bill Barr did not show up for it — suggested to Lewandowski that he “chickened out.” During another exchange, Lewandowski replied that he did not, and claimed he went on a family vacation.

In his opening statement, Lewandowski railed against the Trump investigations.

“It is now clear the investigation was populated by many Trump haters who had their own agenda – to try and take down a duly elected president of the United States,” he said. “As for actual collusion or conspiracy, there was none. What there has been, however, is harassment of this president from the day he won the election.”

The president was apparently watching, and tweeted: “Such a beautiful Opening Statement by Corey Lewandowski! Thank you Corey!”

Meanwhile, Republicans mocked the hearing, with a fired-up ranking member Collins dismissing it as “re-run season,” saying the committee’s previous hearing with Mueller didn’t “go well.” Collins dismissed the Democrats’ effort to seek impeachment, saying, “You don’t have the votes.”

Mueller found that there was not enough evidence to establish a conspiracy between Trump’s campaign and Russia, but reached no conclusion on obstruction of justice. Barr later made his own decision on obstruction, saying there was insufficient evidence.

“Excited about the opportunity to remind the American people today there was no collusion no obstruction,” Lewandowski tweeted in the hours before the hearing. “There were lots of angry Democrats who tried to take down a duly elected President. Tune in. #Senate2020”

The hearing underscores what has been a central dilemma for House Democrats all year — they have promised to investigate Trump, aggressively, and many of their base supporters want them to move quickly to try to remove him from office. But the White House has blocked their oversight requests at most every turn, declining to provide new documents or allow former aides to testify.

The Republican Senate is certain to rebuff any House efforts to bring charges against the president. And moderate Democrats in their own caucus have expressed nervousness that the impeachment push could crowd out their other accomplishments.

Fox News’ Catherine Herridge and The Associated Press contributed to this report.